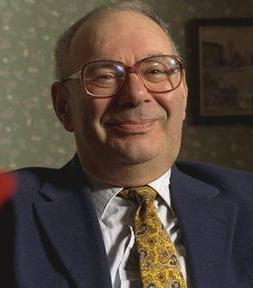 Rabbi Lionel Blue OBE (6 February 1930 – 19 December 2016) was a British broadcaster, journalist, chef, author and a rabbi for Reformed Judaism. He was mostly known for appearing on BBC Radio Four's Thought For the Day segment for more than 25 years, and was a minister in two synagogues and the European Director of the World Union for Progressive Judaism.

He was a rabbi for over forty years and is mostly known in the British Jewish community for being the first rabbi to reveal that he is gay, publishing a book about it in the 1980s. He occasionally gave guidance to Jewish teenagers in Britain struggling to be comfortable with their sexual orientations, and was one of the patrons for London's Centred

Lionel was widely known in the U.K. for his many television appearances and the books he's written. His combination of wit, humour, humility and compassion has appealed to and entertained persons from diverse religious and spiritual backgrounds.

For many years he was the popular face and voice of British Judaism in British media. Practically any British Gentile will tell you who Lionel Blue is, but will struggle if asked to name the current Chief Rabbi.

Books by Rabbi Lionel Blue include: