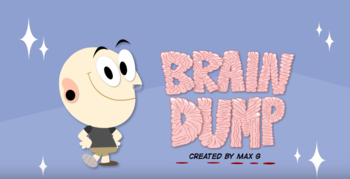 "The clickbaitiest show on the internet, where I discuss movies like a huge insufferable nerd!"
Goofball: I thought this show was you talking about movies.
Max: This show is whatever I want it to be.
Goofball: Yeah, and apparently you want it to be you bending over backwards to make sure you never get a date again.
Brain Dump

is an online animated series by HotDiggedyDemon, where the host, Max Gilardi, mainly talks about recent movies (usually specific elements of said film like the message) in a hilariously cynical and Self-Deprecation-filled fashion. The first episode, discussing the message of Zootopia, aired on YouTube September 2, 2016.
Advertisement:

In his reviews, Max is accompanied by his sentient computer Burnbot and his annoying ghost roommate Goofball. These three characters have their own sheet here.

The series provides and discusses examples and of:

I'm Max G, that was my Brain Dump of the week, and I hope you hated it!