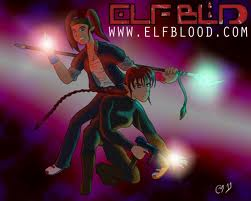 is a bi-weekly webcomic by Chris Manson that tells the story of two warring factions of magical beings, hidden in the shadows of a human city. It is a science-fantasy action-drama, with a rich cast of characters who possess a complex set of relationships and ideologies between them.

The main story focuses on a young girl, Mara, whose life is invaded and shattered by the conflict between the two groups. A renegade elf, TKO, is fleeing from a soldier of The Council, her former captors. Mistaking Mara for a fellow elf due to the elven blood in her veins, TKO unwittingly leads her pursuer, Buma, to the house. Mara's mother is killed in the ensuing fight, and to keep her safe from the clutches of the controlling Council TKO must drag Mara away from the normal life she knew before. A bewildered Mara must adjust to the violent and ruthless magical society she now finds herself a part of, and must come to terms with a heritage kept hidden from her all her life.

Elf Blood is separated into story arcs, each spanning four 'blocks' of around 12 pages each. It is illustrated in a manga style and composed similarly to a graphic novel. New readers are advised to start at the beginning, given the story-driven nature of the comic.

No, it has nothing to do with Blood Elves.