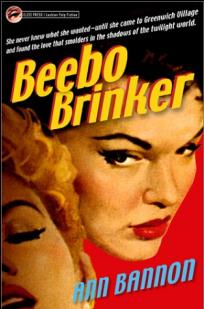 In the fifties and sixties a thriving genre of trashy, sensationalistic pulp novels purporting to expose the sordid twilight world of lesbians sprang up. While most these dime store novels were written by and for straight men and traded mostly in ugly stereotypes about lesbians (and their eventual defeat and/or rescue by a male hero), a rare few were actually written by lesbian authors who attempted to treat their heroines with respect—and a healthy splash of camp and sensationalism, too.

Among the most famous of these were the five novels that make up The Beebo Brinker Chronicles, by Ann Bannon. The books follow the coming out and search for love and happiness by pretty, feminine, very damaged Laura, and her Bifauxnen lover Beebo in 1950's Greenwich Village. Melodrama, angst, and sex ensue.

Not to be confused by a certain cat that smokes and has facial hair, or with the blue-furred plush toy / time-demon killer.