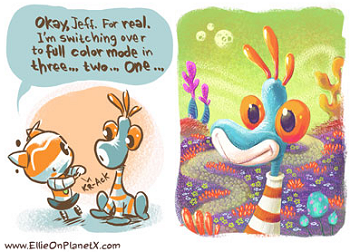 Or at least, sensors blown.
Ellie On Planet X

is a cute sci-fi/comedy comic by James Anderson.

Decades ago a spunky robot nicknamed Ellie was sent on a mission to a remote planet circling a distant star. It took more than thirty years for her to travel across the vacuum of space before she reached her destination eight light years from Earth. Finally, after years of waiting, the first transmissions from Ellie on Planet X have reached our receivers. Now you can follow Ellie along on her adventures exploring the surface of this alien world as she discovers new life forms and makes first contact with intelligent creatures!

Tropes found in the comic include: