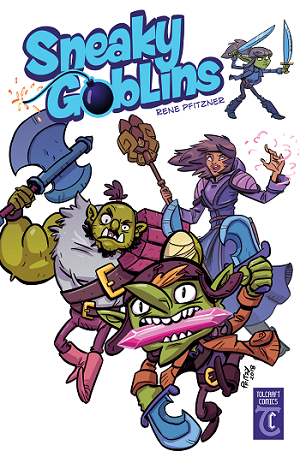 From left to right: Bog, Dank, Sonya, and Sophie
Advertisement:

tells the story of Dank, a rogue-in-training who is rather lacking in experience and practical skills. After being expelled from the first year of assassin school, he checks out a shady-looking job listing out of sheer desperation. With a nigh-impossible task before him, and murder by employer looming if he gives up, Dank has to play the whole adventure by the seat of his pants, and hope he's good enough—and lucky enough—to survive.

Sneaky Goblins is written and drawn by Rene Pfitzner, a former animator for Disney and contributor to multiple comics and websites. It was begun in 2015, and has been completed. Its universe is set as a hybrid of Middle-earth and Azeroth.