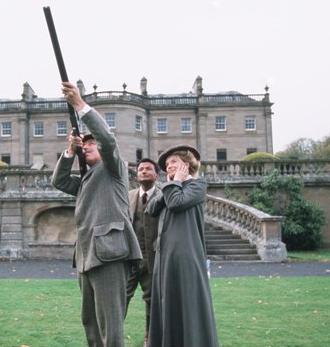 Sir John is about to teach First Footman Rob the punishment for failure to buff the tea cozies.
Advertisement:

A 2002 British TV Series, the latest in a long trend of Historical Recreation Reality Shows. Following the success of 1900 House, this series attempted to recreate life in an English country estate at the height of the The Edwardian Era. A modern-day, moderately well-to-do British family are brought in to step into the polished boots of turn-of-the-century landed aristocracy, while other normal people from different walks of life take up the roles of the staff.

During the three-month social experiment, all participants are required to not merely talk the talk, but also walk the socially-stratified walk. Abovestairs, the Oliff-Cooper clan adopt the lifestyles of the landed gentry while navigating the labyrinthine rituals and customs of a typical Edwardian social season. Belowstairs, the servants are expected to carry the full workloads of their turn-of-the-century counterparts, while also observing all period etiquette, protocols and restrictions. Hilarity Ensues.