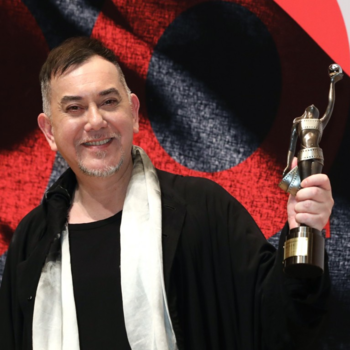 Anthony Wong Chau-sang (黃秋生, born Anthony William Perry; 2 September 1961) is a Hong Kong actor best known for having a wide range of roles in various films in different genres, but most notably in the West for his performances in Hard Boiled and Infernal Affairs.

Born to a white Australian father and a Hong Kong Chinese mother, Wong recalls his childhood being rough and somewhat traumatic; his father left his family when he was four since he already had a family in Australia (causing him to adopt his mother's surname, Wong) and he was often bullied in school due to being of mixed heritage. Wong states that he remembers living under a staircase with his mother when being evicted from their home, and working three jobs at a time as a teenager.

Wong began his acting career at age 21, where his mixed-heritage appearance easily earns him villainous roles due to the trend of Hong Kong movies casting foreigners as antagonists at the time, but his career didn't really take off until his performance in The Untold Story; based on a real-life murder case in Hong Kong in the early 90s, Wong's portrayal of a serial killer who made meat buns of his victims earns him 1993's Hong Kong Film Awards.

Ever since he started acting, Wong has appeared in over 150 films, although plenty of his roles are bit parts or as villains.

Wong made his directorial debut in 1995 with The New Tenant.

Oh, and he is the voice of Shrek in the Cantonese dub.