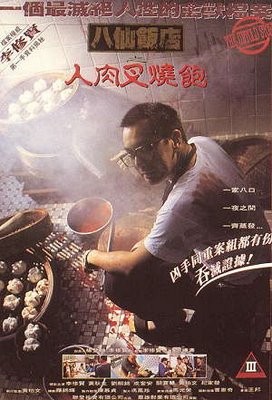 You are what you eat.
Advertisement:

A nasty, Cult Classic Hong Kong movie from 1993 directed by Herman Yau and produced by Danny Lee (of The Killer fame), starring Danny Lee and Anthony Wong, and supposedly based on true events.

A severed hand washes up on a beach in Macau. The local cops, led by Inspector Lee (Danny Lee), investigate, eventually leading to the Eight Immortals Restaurant, which is run by the polite and nerdy Wong Chi Hang (Anthony Wong). Mr. Wong cannot provide proof of ownership for the restaurant, which has a really high turnover rate in employees who always seem to leave abruptly. The police soon find that the restaurant once belonged to a family who was nowhere to be found. The cops know something isn't right but they don't have proof of anything. Eventually, they resort to extreme methods to force a confession from Mr. Wong.

What they find is far more disturbing than they could have ever imagined.

Whatever you do, don't try the dumplings.