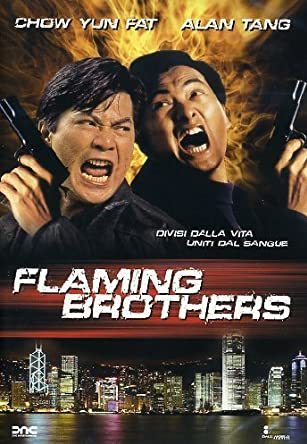 Alan Chan (Alan Tang) and Cheung Ho-tin (Chow Yun-Fat) are orphans who spend most of their childhoods wandering the streets of Macau, and having known each other since young, they've become inseparable, bonding through their daily lives stealing food to survive and going through the rough life on the mean streets. Growing up to join a local triad, Alan goes on into becoming a top hitman and fell in love with Macau singer Jenny, while Cheung, after advice from his old friend/benefactor Richard and becoming engaged with Pat, a Catholic church worker, decides to go straight. However, their faith in brotherhood is put to test when Ko Lau-sei, a ruthless triad leader, tries turning both brothers against each other.

One of Chow's lesser-known films, being released between the first A Better Tomorrow and The Killer, Flaming Brothers remains a little seen gem in Chow's filmography.