Film / Days of Being Wild 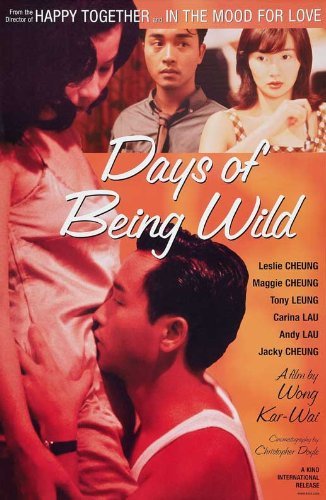 A 1990 film directed by Wong Kar-wai and produced by Alan Tang.

Set in 1960's Hong Kong, the story centers around the Troubled Yuddy/York (Leslie Cheung), a bad boy in the All Girls Want Bad Boys sense who seduces women into loving him then mistreats them until they leave him. The film starts with his romance with demure concession stand girl Su Lizhen (Maggie Cheung), and after their breakup to his seamlessly picking up feisty hooker Mimi. The story also deals with York's dysfunctional relationship with his adoptive mother Rebecca (Rebecca Pan), an aging prostitute whose crass emotional extortion over his Missing Mom has left him with much of the emotional baggage that makes him mistreat women.

The rest of the film deals with York, Lizhen , Mimi, Nice Guy cop Tide (Andy Lau) and York's Dogged Nice Guy friend Leb (Jacky Cheung) dealing with the emotional fallout of these relationships while York chases down a lead on his biological mom's whereabouts.