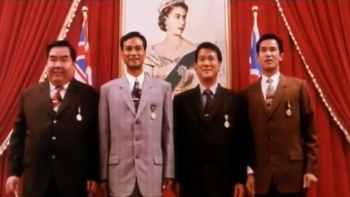 The Powerful Four is a 1992 Hong Kong drama and crime thriller set in the 1960s, dealing with the rise of four police lieutenants who forms a bond while facing a common enemy. While loosely based on real events surrounding the 1970's indictment of Hong Kong police superintendent Peter Godber, which leads to the eventual formation of the Independent Commission Against Crime (ICAC, similar to an "internal affairs" department in a US police department), the film details the further backstories involving the British and Chinese relations within the police force, for both legal and illegal activities, which first comes to a head in area of corruption.

Danny Lee (best known for his role in The Killer as the super-cop Lee), Hong Kong's go-to actor for portraying police officers, plays Inspector Luk Kong, who is recently promoted while dealing with the rising triad activity in Hong Kong. When his long-time friend Liu Kit (Simon Yam, Bullet in the Head), which Luk assumed he would never meet again, ends up in the same department as him, their investigations attracts the attention of officers Yiu Hung (Waise Lee, Bullet in the Head) and Ho Sum (Kent Cheng, Once Upon a Time in China), at which point the quartet forms an unlikely brotherhood to take down the growing triad activity in Hong Kong.