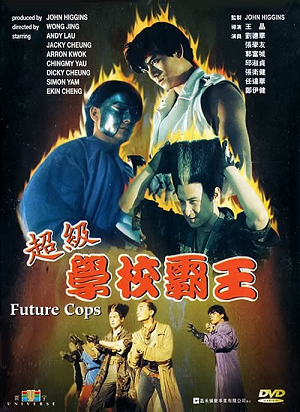 Just so we're clear, is this supposed to be Street Fighter? No?
Advertisement:

One of the most bizarre films to ever embrace the Hong Kong action style, directed by Wong Jing (the same year he did the live-action City Hunter) and very very very loosely based on Street Fighter, in the sense that the characters look like Street Fighter characters, but they're not named after them, except for Chun Li, but only on the 'Chun' Future Cops is a rather unique experience.

In far future, Judge Yu Ti Hung is about to deliver a lifetime sentence to a nefarious crime lord named 'The General' (M. Bison). His henchmen; Kent (Ken), Toyota (E. Honda) and Thai King (Sagat); hatched a plan to go back to the past and brainwash the young Yu Ti Hung so he will let the General go during the penultimate trial. The local Time Police aptly named 'Future Cops' sends out four of their men: Lung (Ryu), Broom Man (Guile), Ti Man (Vega) and Ah Sing (Dhalsim). The villains go back in time, while the Future Cops pursue them, except Lung because apparently he's the Police's Director son in law. (The rest of the cops do not take this well for awhile)

So Broom Man, Ti Man and Ah Sing go to the past and gets help from a 20 years old high school student named Tai Hung (who's quite possibly based on Nobita with the This Loser Is You treatment dialled up to eleven) and pose as students and teachers in the school where Yu Ti Hung used to enroll, in hopes to find him and protect him. Things get wacky when they encounter the bad guys, as well as finding out that Tai Hung is actually Yu Ti Hung

If you have been reading the paragraphs above, yes, you will realize that the alignment of the good/bad guys have been messed up. Regardless, this show seems to be more of a parody, provides a lot of silly, hilarious and wacky moments and doesn't take itself very seriously.