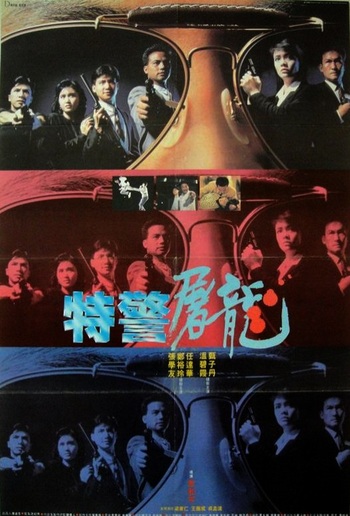 How many of these guys are about to shoot the audience?
Advertisement:

Tiger Cage is a 1988 action movie directed by Yuen Woo-Ping, starring Jacky Cheung, Donnie Yen and Simon Yam, and is one of Yuen's many collaborations with Donnie throughout his career, the two of them having worked together previously in Drunken Tai Chi, and will collaborate again in the sequel, and in Iron Monkey.

When a team of police officers consisting of Fan (Jacky), Terry (Donnie), Shirley (Irene Wan), and their superiors Inspector Huang (Simon) and Uncle Tat (Richard Ng) busts a drug deal, but with the leading drug dealer escaping, they end up finding themselves being marked for death, not only by the dealers, but by an informant and mole in their ranks.

The movie is followed by a sequel two years later, Tiger Cage 2, also starring Donnie Yen, but this time the movie follows an entirely new storyline with all-new characters, its cast including Cynthia Khan, Rosamund Kwan (from Once Upon a Time in China) and Robin Shou. The new plot involves Inspector Yau (Donnie), a police officer who ends up getting involved in Mandy (Rosamund), a lawyer, who's a witness in a crime.

Donnie Yen, Yuen Woo-ping and Cynthia Khan would collaborate once again later, in In the Line of Duty 4: Witness.