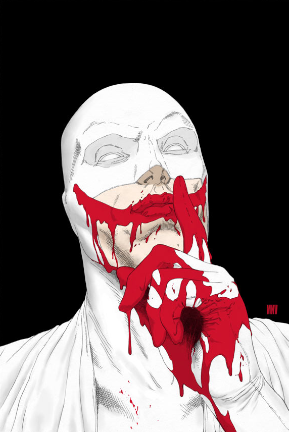 What if Batman was The Joker?

Nemesis follows the adventures of a rich playboy that enjoys the finer things in life: fast cars, beautiful women, and "dealing" with someone on a 28-day (violent) crime spree. Marketed as the comic that "Makes Kick-Ass look like shit!" this was written by Mark Millar for Marvel Comics.

A movie adaptation is in the works, with the script written by Joe Carnahan (The A-Team, Smokin' Aces). It was greenlit after the surprise success of another Millar adaptation, Kingsman: The Secret Service.

Should not be confused with Nemesis the Warlock or Star Trek: Nemesis. Nor should he be confused for the vigilante with the same name from DC Comics or the horror board game Nemesis. You may be looking for Nemesis from Resident Evil 3: Nemesis.