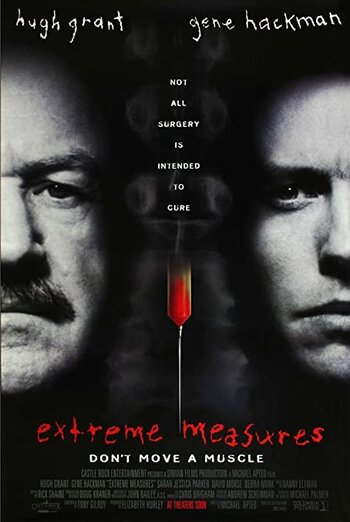 Extreme Measures is a 1996 thriller film directed by Michael Apted and based on Michael Palmer's 1991 novel of the same name, about the ethics of how far we are willing to go, and how much we are willing to sacrifice, in order to cure the world's ills.

Guy Luthan (Hugh Grant) is a British doctor working at a hospital in New York, who starts making unwanted inquiries when the body of a man who died in his emergency room disappears. The trail leads Luthan to the door of the eminent surgeon Lawrence Myrick (Gene Hackman), but Luthan soon finds himself in danger from people who want the hospital's secret to remain undiscovered.