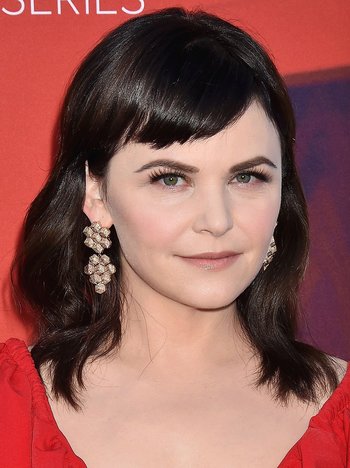 Jennifer Michelle Goodwin (born May 22, 1978), better known as Ginnifer Goodwin, is an American actress. She was born in Memphis, Tennessee. Her sister, Melissa, is a stop-motion animator for shows like Robot Chicken.

She's a Shakespearean actress, having studied in Stratford-on-Avon with the Royal Shakespeare Company and at the Royal Academy of Dramatic Arts. Her first television roles were on Law & Order and Ed, before moving on to film. She played roles in films like Mona Lisa Smile, Win a Date with Tad Hamilton, Walk the Line, and Birds of America. She also played a leading role as Margene Heffman on the HBO series Big Love, He's Just Not That into You, Ramona and Beezus, and recurring voice roles on Robot Chicken.

In 2011, Goodwin was cast as Snow White on the ABC television show Once Upon a Time. The fall of that year, she started dating her Once... co-star and the actor playing her character's husband, Josh Dallas, and the two have a son. She also voices Judy Hopps in Zootopia and its spin-off Zootopia+. Following the finale of Once..., she was cast as Beth Ann Stanton in Why Women Kill. She's won multiple People's Choice Awards over her career.

Tropes associated with Ginnifer Goodwin and her work: