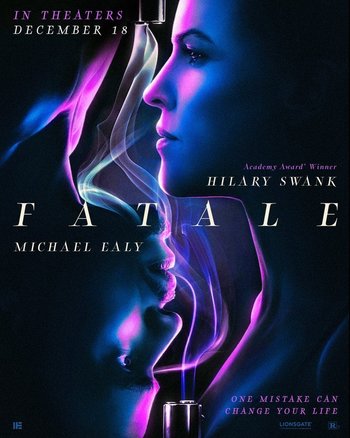 One mistake can change your life.
Fatale is a 2020 American thriller film starring Hilary Swank, Michael Ealy, and Mike Colter. Directed by Dion Taylor, it had a limited theatrical release in the United States on December 18, 2020.
Advertisement:

Successful and married sports agent Derrick Tyler (Ealy) spends an illicit night of sexual passion with LAPD Detective Valerie "Val" Quinlan (Swank) in Las Vegas, with the two later agreeing that it was a one-time occurrence. However, all is not as it seems, with Derrick soon finding himself ensnared in a murderous and spiteful scheme orchestrated by Valerie.