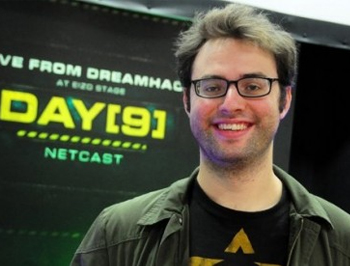 Want to go from Bronze to Masters in Starcraft II? Easy, peasy, febreezy!
"Welcome, Ladies and Gentlemen... this is the Day9 Daily: where we learn how to be a better gamer!" "Except on Monday where we just dick around."
Advertisement:

Taking the plunge into the competitive-scene of Starcraft II can seem like an impossibly daunting task. There are so many variables to keep track of and so many concepts, both basic and advanced, to wrap one's mind around that it can feel a bit overwhelming.

Enter the Day9 Daily, a place where anyone from a Real-Time Strategy stripling to someone scraping up against the ceiling of the exalted Masters league can learn how to be a better gamer.

Sean "Day9" Plott is a famous StarCraft: Brood War and Starcraft II player and commentator with his Internet Day9 Daily show, where he casts and analyzes high level play in front of a live audience, five days a week.

The self-proclaimed "Goldilocks of Starcraft II casting," Day9 keeps the atmosphere of his casting informal, lighthearted, and comical, all while ensuring that the actual analysis stays deep, thorough, and compelling throughout.

To shake things up, Day9 featured a rotating schedule of theme-based dailies:

In 2013, Day9 joined Artillery Games and began working as a game designer on Guardians of Atlas, a Multiplayer Online Battle Arena that ran in browsers using HTML5. The game, and company, folded in '17, but this day job created such a time crunch that he abandoned the Day9 Daily; today he is a relatively standard streamer who plays for fun, particularly Hearthstone: Heroes of Warcraft, Dota 2 and Magic: The Gathering. He has shoutcasted live tournaments for the latter two games. He also hosts a series called "Spellslingers" via Geek & Sundry, in which he and a guest play Magic; and he and two friends replaced Funday Monday with "Mostly Walking

," which revolves around the Point-and-Click Game.

. Archives can be found at either Blip

This trope is brought to you by the number j!