Music / You Belong with Me 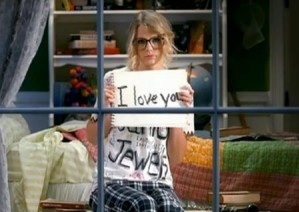 "If you could see that I'm the one who understands you
Been here all along, so why can't you see?
You belong with me"

"You Belong With Me" is one of Taylor Swift's first big hits. A 2009 single from Swift's 2008 album Fearless, it has a troperiffic music video starring Swift as both the Girl Next Door protagonist and The Cheerleader rival, alongside Lucas Till as The All-American Boy love interest.

The video is from the perspective of a blonde band geek with a crush on her kind-hearted neighbor, a wholesome boy on the football team . . . who is dating a brunette Alpha Bitch cheerleader. The protagonist feels she has a special relationship with her crush, and they frequently exchange messages via large notepads through their opposing bedroom windows. As the video progresses, the love interest slowly realizes that his girlfriend is unpleasant and has cheated on him, while his true affections lie with his neighbor. The video culminates with Taylor turning up to prom to dance with him, and revealing the note she never held up: "I love you." The boy pulls his identical note out of his tuxedo, and they dance Happily Ever After.

At the 2009 MTV awards, it won Best Female Video. There's a good chance that you remember this, because the speech proved a memorable and memetic, with Kanye West inexplicably taking the stage (and the microphone, directly from Swift's hand) to announce his displeasure at the win. This interruption was the beginning of a long-running feud between the artists, which would work its way into many future Taylor Swift songs.

Tropes associated with "You Belong With Me":