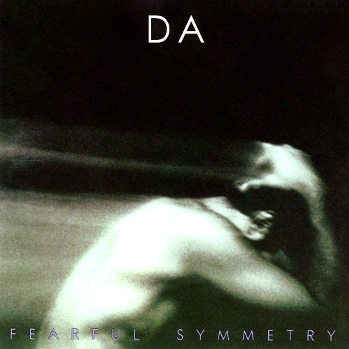 Glass darkly shades the final rest / Still He will surely past this test.
These are your drowsy days in vain.
You will not wake to sleep again.
Will come the hour when you will never,
sleep again but wake forever.
— “Instruction Thru Film”
Advertisement:

Fearful Symmetry is Daniel Amos’s (or as they called themselves at the time, DA’s) seventh studio album, released in 1986. Though it didn’t say anywhere on the cover, this was the fourth and final part of their concept album series The Alarma Chronicles.

At the time, frontman Terry Scott Taylor had death on his mind. His wife had recently miscarried, and he had lost two grandparents who he’d been very close to. So on the issue of how to end The Alarma Chronicles, the answer seemed obvious: the final chapter would be a meditation on death and Heaven. Taylor’s story in the liner notes

picked up where Vox Humana had left off: the dreamer wakes up from his vision, writes down his story, and realizes that he’s on the verge of waking up again—passing via death into a greater reality.

Musically, Fearful Symmetry merged the darker sound of Doppelgänger with the synthesizer emphasis from Vox Humana. Although here, DA mainly used the synths to stand in for orchestral embellishments, more effectively on some songs than others.