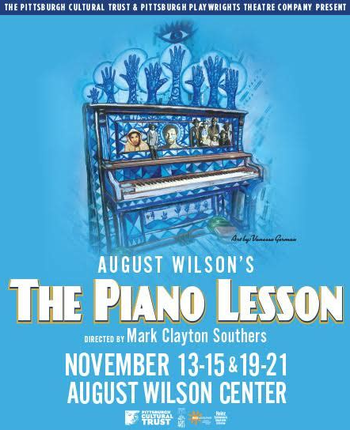 The Piano Lesson is a 1987 play by August Wilson. It is the fourth play in his ten-play "Pittsburgh Cycle".
Advertisement:

Pittsburgh, 1936, the Hill District. The Charles family is a black family that in the relatively recent past has moved to Pittsburgh from Mississippi. Bernice, a 35-year-old widow, lives with her 11-year-old daughter Maretha in the home of her uncle Doaker. The family's prized possession is a grand piano, carved with the faces of their recent ancestors. The piano was formerly owned by the Sutter family, who a few generations back also owned the Charleses as slaves. In 1911 Bernice's father Charles and his brothers Doaker and Wining Boy, who believed they were entitled to the piano for their work on it and their family's decades of unpaid labor, stole it. As a result Bernice's father was killed.

Bernice's loud, brash brother Boy Willie arrives from Mississippi after recently getting out of prison. Boy Willie wants to buy the Sutters' land, now for sale after the latest Mr. Sutter's death. To raise capital, he wants to sell the piano. Bernice flatly refuses to sell the piano, which after all is a family heirloom. Tensions mount as the siblings argue over the piano—tensions exacerbated by the appearance of Sutter's ghost in the household.

Samuel L. Jackson appeared in the original production as Boy Willie. See also Fences, another play in the Pittsburgh Cycle.