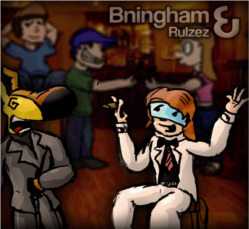 meme. It's created by Bingham and Rulez

, who are also the main characters on the show, albeit with their names misspelled. They are up to hilarious misadventures involving furfaggots and evil abusive parents. Bningham (who is portrayed as a deer for comic relief) is abused by her father and soon moves out. She becomes depressed and meets Rulzez, an annoying youngster. He "adopts" her and they soon become friends and join the Pirat Cummunity where they meet a lot of colourful, yet twisted characters.

Ikkea: wtf is this sith
Rulzez: thats a fukin phon
Ikkea: this luks nofin like a phon
Rulzez: cuz ur a fukin dumass and im teh creter of teh fukin sho, folo teh skript or ill ejaclate on ur faec
Ikkea: shit k