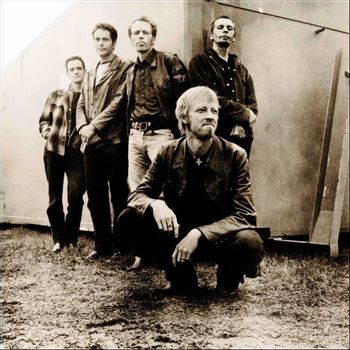 Ca. 2002.
Come and sing us down,
give our conscience a poundin'.
Come an' shake our ground, Lord,
with the sound of Heaven's houndin'.
—"Clogger"

Picture in your mind: In some forsaken corner of the American West, under a sky black with storm clouds, a man rides across the foothills of the Rocky Mountains. He has a gun on his hip and a Bible in his saddlebag. He's pushing his horse to its absolute limit, but it's not clear why he's in such a hurry — whether he's the pursuer or the pursued, fleeing the law or God himself.

That, in a nutshell, is what 16 Horsepower sounds like: Gothic Country Music, with influences from bluegrass, European folk, and alternative country. The band played once in 1992 in Los Angeles, then reformed in Denver, Colorado. Throughout the '90s, they made a name for themselves in the Denver music scene and in Europe, with music ranging from haunting to apocalyptic, and lyrics focusing on the fear of God, wrongdoing, and redemption. In the '00s, they began drifting apart and focusing on side projects; in 2005, they officially disbanded.

The roster was somewhat fluid, but the core members were: