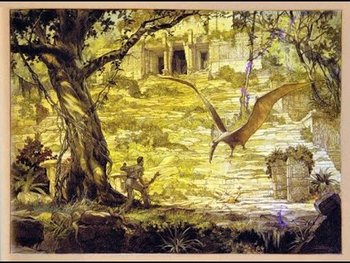 Creation is an unfinished film from 1931 by Willis O’Brien and Merian C. Cooper. Essentially it’s about a rich family who get stranded with a Chillean submarine crew on an island of prehistoric animals and try to survive on it before the island blows itself up.

The film was scrapped by Cooper himself and producer David O. Selznick, who deemed it too boring and lacking in action. O’Brien and Cooper would later team up on a much more successful project that DID end up getting finished. What film was that? King Kong. In fact a lot of ideas and concepts from this made it into Kong.

Presumed lost, some test footage of the film was discovered to have survived. The screenplay also survived and both were unveiled during the anniversary of King Kong by future remake director Peter Jackson. The test footage can be seen here

in all it’s cheesy glory.