This page contains unmarked spoilers for Jurassic World: Fallen Kingdom and the Jurassic Park film trilogy. You Have Been Warned! 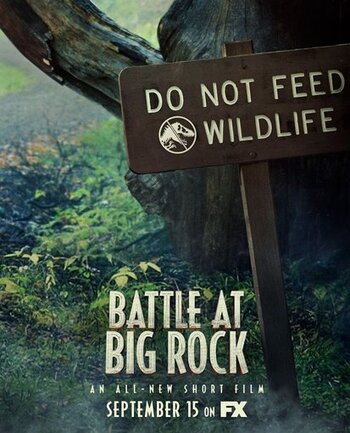 "How did they get this far north?"
Advertisement:

A year after the events of Fallen Kingdom that saw a number of dinosaurs being released on American soil, people are still trying to get used to sporadic dinosaur sightings and incursions in the rural areas of the western states. While a family is enjoying the outdoors at a trailer park with some neighbors, dinner is interrupted when a mother and baby Nasutoceratops begin scouring the campground looking for food. The situation becomes both more complicated and far more dangerous when a similarly hungry Allosaurus appears from the dark woods looking at both the ceratopsians and humans as a potential meal.

The film was uploaded online on various platforms, with a Youtube link available here