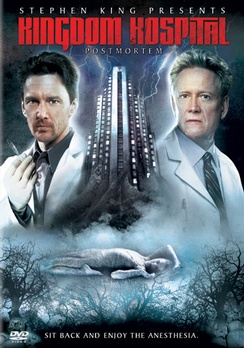 Villain and protagonist side by side — the villain's the clean-cut one here, by the way.
Advertisement:

So you have a hospital. Nice place, folks get healed there, their illnesses and sicknesses happily resolved, and they're sent on their way. It's, in fact, the best hospital in the state of Maine. All sorts of odd illnesses get fixed there, up to and including clinical death.

Good news: it's one of the leading research and medical centers in the state. Bad news? It's haunted.

Kingdom Hospital is a medical drama with a twist: the hospital is haunted, and its cast finds itself dealing with increasingly odd and creepy phenomena on a daily basis, punctuated by the occasional earthquake. The series opens with Peter Rickman, a helpless artist thrust into sudden dreams and paralysis by a drunk driver, being escorted to this hospital — followed by a host of oddities following in his wake, up to and including a ghostly child, an odd anteater-marsupial hybrid which seems to be something more than he appears, and an odd adversary who conspires to mark Peter for death.

And all the while, there's a hospital staff wandering around, unwilling or unable to see the drama unfolding beyond their sight, with the exception of the occasional creepy incident... such as a monitor's head turning towards a doctor and speaking, or a given artist healing unnaturally fast...

While billed as a medical drama with twists, Kingdom Hospital also happens to be a Ghost Story, written, directed, and produced by — of all people — Stephen King, whose influence shows up without doubt as soon as the first episode. However, King adapted it, with permission, from the Danish series Riget.

This series contains Nightmare Fuel and a rather sizable number of creepy moments. Strangely, at no point does it actively employ the Rule of Scary.

A tie-in prequel (which overlaps with the first episodes of the series), The Journals of Eleanor Druse: My Investigation of the Kingdom Hospital Incident, was released in January 2004.

This miniseries contains the following tropes: