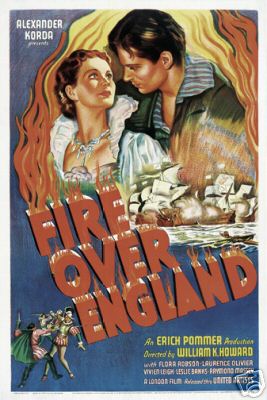 "My people, I am come to live or die amongst you all; to lay down, for my God, and for my kingdom, and for my people, my honour and my blood, even in the dust. I know I have the body of a weak and feeble woman; but I have the heart and valour of a king, and of a king of England, too! Not Spain nor any prince of Europe should dare to invade the borders of my realm. Pluck up your hearts! By your peace in camp, and by your valour in the field, we shall shortly have a famous victory!"
— Queen Elizabeth I (Dame Flora Robson)
Advertisement:

" fame. Produced at a time when the Jewish Korda was desperately trying to rouse Britain for the coming fight with Nazi Germany — a not entirely popular position in those war-weary times — Fire Over England used the "Black Legend

" of Spanish aggression and Elizabeth I's glorious opposition to the invading Armada to reflect the need for a vigorous defence of England's liberties.

The film begins with a title-scroll stating that Spain's King Philip II (Massey), who rules "by fear and force," is opposed only by one freedom loving little island led by a woman — Elizabeth the Queen (Robson). Michael Ingolby (Olivier), fighting with his Privateer father Richard against the Spanish, is allowed to escape when their ship is seized by the Spanish captain Don Miguel, his father's friend, though Sir Richard Ingolby is arrested by The Spanish Inquisition. Michael makes his way to Don Miguel's house, where he is nursed to health by Don Miguel's daughter, Elena (Desni) — who (though she is to be married) rapidly falls in love with him, though he is in love with Cynthia (Leigh), granddaughter of Lord Burleigh (Morton Selten). However, when Michael learns that his father has been executed, he turns on them and for England. There, Queen Elizabeth is playing diplomatic cat-and-mouse with the Spanish, but is torn between the cautious policy of Burleigh and the overtly aggressive one of the Earl of Leicester (Banks), who fears for her safety, as some of her own courtiers are plotting against her — among them, Mr. Hillary Vane (a young James Mason), drowned when Leicester attempts to arrest him. Elizabeth, Burleigh, and Leicester convince Michael, over Cynthia's objections, to return to Spain in place of Vane to learn the details of the plot.

Reportedly, this film was responsible for Vivien Leigh being cast as Scarlett O'Hara.

Tropes employed in Fire Over England: