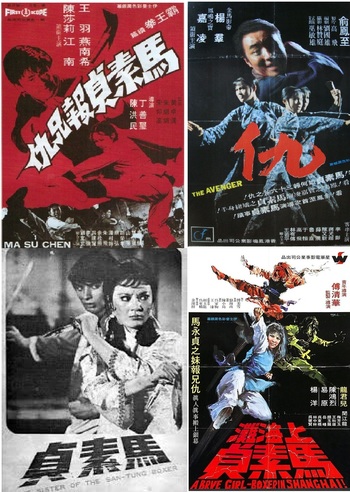 In 1971, Shaw Brothers studios released The Boxer From Shantung, the martial arts classic that introduces the character Ma Yong-zhen, based on the real-life chivalrous gangster and classical anti-hero with the same name, who died in a mob war after being double-crossed by his underlings. In that same year, Jimmy Wang Yu released his version of the story, titled Furious Slaughter, spawning a sequel titled Bloody Struggle or Ma Su-zhen merely weeks later.

Making her debut in the sequel is Ma Su-zhen, the (supposedly) fictional sister of Ma Yong-zhen, who learned of her brother's death and traveled from Shantung to Shanghai, in a mission to avenge him. Following Bloody Struggle, comes an entire series of spin-offs and adaptations from 1972 to 1988, based on Ma Su-zhen's quest for vengeance. Following Nancy Yen's version of the character, multiple actresses has portrayed Ma Su-zhen, including...

While popular in her heyday, most of these movies nowadays caters more towards a niche market, for fans of martial arts movies featuring ass-kicking heroines from the early 70s.