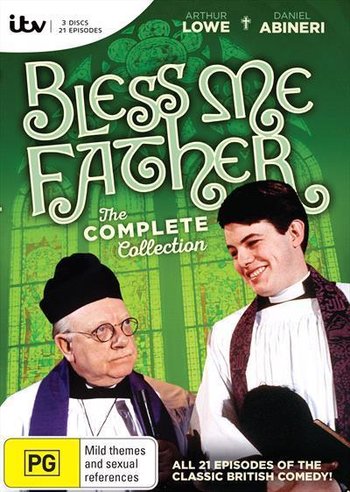 This series of comic short stories ran into five books and was eventually adapted into a TV comedy series, which in very many ways was the spiritual parent of Father Ted. The series of books was written by Father Peter de Rosa and the subsequent TV series, which aired on London Weekend Television for three series of seven episodes each between 1978 and 1981, draws upon these autobiographical novels, written as "Father Neil Boyd".

The series is an engagingly idiosyncratic situation comedy based on the post-war experiences of a young priest, Father Neil Boyd (played in the TV series by singer-actor Daniel Abineri), sent to the parish of St. Jude's in the London suburb of Fairwater in 1950 as a curate to parish priest Father Charles Duddleswell (a post-Dad's Army Arthur Lowe). This series gains extra bite from the relatively embattled situation of the parishioners as (mainly Irish) Catholics in a firmly Protestant Britain just recovering from the war, and still smarting under Government rationing and other restrictions, such the common prejudice against Irish people, that would later translate itself to a growing black ethnic minority. (Indeed, at some point during the series the first immigrant boats must have arrived from the West Indies, as an Irish priest is seen wrestling with the special concerns of black parishioners). It should also be noted that St. Jude is the Catholic patron saint of lost causes...

Period detail is understated but convincing, particularly the hideous clothes worn by the pious women. Mrs Pring, the priests' housekeeper, is no Mrs Doyle. Indeed, it becomes increasingly clear through the series that her relationship with Father Duddleswell is, in all but name, a comfortable forty year old marriage in all respects except a shared bed. Father Neil, in this dynamic, is effectively the "son" to both. While at first raw and naive and having some of the open-eyed childlike qualities of a Father Dougal Maguire, Neil Boyd soon shapes up in both book and TV series to be a remarkably effective young priest. Father Duddleswell, similarly, can be viewed as an equally financially crafty but far more honest Father Ted Crilly, who maintains scrupulously honest accounts. There is, in the background, a bishop as fearsome and as vain as Len Brennan, and the local convent is run by one of the most fearsome Mothers Superior in literature. One of the few people who can intimidate Duddleswell, she is quietly fond of Father Neil.

Father Neil becomes embarrasingly aware that he has the sort of dark good looks which spark something of a reaction among the more impressionable female members of the parish. Women of a certain age tend to go to him for Confession and spiritual guidance and this provokes situations. Father Duddleswell would be outraged at any explicit suggestion that he is cunningly pimping his curate out to lonely rich widows in exchange for large donations to parish funds. Nevertheless, Neil begins to suspect he is being used as a parish asset in this way. Neil has a sort of covert "winking and smiling" relationship with a young pretty nun, which earns rebukes from both Duddleswell and the Mother Superior, then caps this when he goes into hospital and gets infatuated with the very attractive nurse who tends him after his operation. To cure him of this, Duddleswell introduces him to a third priest resident in the parish, one who is suspended from the priesthood for having had an affair with a woman, who he later marries. This elderly priest, now living in poverty in a house made nearly uninhabitable by a Luftwaffe bomb, comes across as a proto-Jack Hackett, perhaps the Ur-Example.

Duddleswell hopes his petition to the Bishop and the Cardinal to have the old man forgiven for breaking his vows and restored to the full priesthood will be granted - age and familiarity have made it impossible to do nothing more than live in a chaste state with his wife, thus fulfilling his vow of chastity - so that he can become an active priest again in his last few years and die with dignity. In the meantime, Duddleswell succours the couple with gifts of cash and strong drink. Father Neil sees what life is like for a priest who is excommunicated from the Church, and learns a lesson.