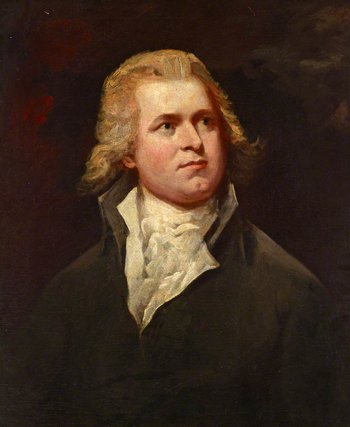 William Pitt "the Younger" (28 May 1759 – 23 January 1806), to distinguish him from William Pitt "the Elder", his father, was the youngest ever British Prime Minister (although at this period the term "Prime Minister" was not used), appointed at the age of just 24. He left office in 1801, but became PM again from 1804 until his death less than two years later — making him also the youngest PM to die in office. He was succeeded the first time by Henry Addington, then the second time by William Grenvillenote who incidentally was his first cousin (Pitt's mother Hester was sister to Grenville's father George, who had also been Prime Minister) and was his cousin-in-law (Grenville had married Pitt's cousin Anne). His nearly 19 years in total as PM make him the second-longest holder of the office in history, behind only the 21 years of the first ever PM Robert Walpole.

The junior Pitt was (obviously) just a child when his father was Prime Minister, but merely two years after the latter's death and still only aged 21 he was first parachuted into Parliament himself in 1780, as MP for the Oop North constituency of Appleby — a "pocket borough" effectively controlled by his patron, the politician and landowner James Lowther, who owned the majority of the tenements whose occupants had the right to vote. At the time the longterm PM was Lord North, but after North's government fell due to events of the American War of Independence there followed a series of shortlived administrations. The second of these, that of the Earl of Shelburne, saw Pitt appointed to the senior post of Chancellor of the Exchequer — the head of the Treasury — but this was swiftly brought down by an alliance of North and (Pitt's former ally turned rival) Charles Fox, who took power in a coalition nominally headed by the Duke of Portland. Just eight months later however this collapsed in turn; fortunately for Pitt, the King George III was opposed to Fox but in favour of him, and entrusted the young man with the premiership. Just three years after joining the House of Commons, and at only 24 years old, Pitt the Younger was Britain's head of government.

Pitt's early premiership was marked by attempts to curb the National Debt that had been racked up by the American Revolutionary War: his two most infamous taxes were on wig powder and window glass, with the result that he single-handedly ended the 18th century fashion for wigs and a lot of contemporary British buildings still have bricked-up windows.

He was PM during massive upheavals in Europe and once said "Fold that [a map of Europe] up, we will not require it for 10 years" when he heard about the Battle of Austerlitz. He also had to deal with the Napoleonic Wars and the French Revolution.

He furthermore had to deal with the increasingly unstable mental condition of the King, which began to deteriorate notably around 1788. During the monarch's first bout of incapacitation with the disorder Pitt came close to losing his position when the Prince of Wales, the heir to the throne, was nearly appointed as Regent to rule in his father's place — the Prince was a supporter of Pitt's opponent Fox. Luckily, just after a bill for this had been passed in the Commons, the King recovered and Pitt continued as Prime Minister.

Notably, Pitt was responsible for formulating and overseeing the Act of Union between Britain and Ireland in the wake of the 1798 United Irish rising. This meant he ended up not only the youngest but the last Prime Minister of Great Britain (before the Acts of Union 1800) and subsequently the first Prime Minister of the United Kingdom (of Great Britain and Ireland) as of January 1801. He followed up though with a push for Catholic emancipation in Britain and Ireland, which was opposed by the King and led to his resignation in favour of his friend Henry Addington forming an administration.

At first Pitt attempted to support the new government, but he began absenting himself from Parliament and eventually stayed away for longer and longer periods of time. Britain's uneasy truce with France at the end of the latter country's Revolutionary Wars however ended in war breaking out again in 1803 against the French under Napoléon Bonaparte. Although Addington had previously invited him to join the Cabinet, Pitt preferred to join the Opposition, becoming increasingly critical of the government's policies. Addington, unable to face down his critics ranging from Pitt to (ironically) the latter's old foe Fox, saw his majority gradually evaporate and he resigned in late April 1804 — paving the way for Pitt to regain the premiership.

The war and other strains of the top job took its toll however on Pitt's health. He had long suffered from poor health, beginning in childhood, and was plagued with gout and "biliousness" — worsened by a deep fondness for port that began when he was advised to consume it medicinally. On 23 January 1806, Pitt died aged just 46, having spent the great majority of his adult life as Prime Minister. His successor and cousin Lord Grenville put together the abortive national unity government known as the "Ministry of All the Talents", a coalition comprising his own supporters, allies of Pitt, Foxites and old backers of North, though this turned out not to even last a year.

Pitt never married, and was just the second childless PM — after Walpole's briefly-serving immediate successor Lord Wilmington in the 1740s, and one of only four in total, the others being Arthur Balfour and Ted Heath in the 20th century. Despite an ability to be charming to women, he is said to have rejected intimacy when it was proffered. Perhaps inevitably he was the subject of snide remarks about his liking for young male company, though he seems not to have acted upon any desires in either direction. Maybe, as his later biographer and onetime leader of the Conservative Party William Hague suggested, "In practical terms it appears that Pitt was essentially asexual throughout his life, perhaps one example of how his rapid development as a politician stunted his growth as a man."

Perhaps his longest-term influence was the solidifying of so much power under himself, the template that would lead to the Prime Minister/Cabinet relationship the UK has today.

Although often referred to as a Tory, or "new Tory", he called himself an "independent Whig" or "reform Whig" and was generally opposed to the development of a strict partisan political system.

Just as his father had a large number of places named after him, so did Pitt the Younger. Among them are: Pittsylvania County Virginia, Pittwater New South Wales, Pitt Street Sydney (The main financial precinct street), Pitt Street, Hong Kong and The Pitt's Head rock formation in Snowdonia National Forest Park (because it resembled him). While Chatham County was named after his father, Pittsboro, North Carolina was named for William Pitt the Younger.