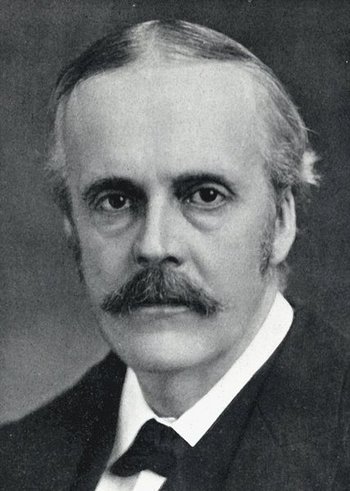 Arthur James Balfour, 1st Earl of Balfour KG OM PC DL (25 July 1848 – 19 March 1930) was a British Conservative politician and statesman who was the Prime Minister of the United Kingdom from July 1902 to December 1905.

He took up the job when Lord Salisbury resigned in July 1902. Salisbury was his uncle, and there were some accusations that Balfour had got started on the political ladder through nepotism, hence the stock British phrase "Bob's Your Uncle" (Salisbury's full name was Robert Gascoyne-Cecil, 3rd Marquess of Salisbury). In truth however, Balfour had been Conservative leader in the House of Commons, and his uncle's de facto right-hand man for close to a decade before he was appointed to the top job himself. Practically the first thing Balfour had to do as Prime Minister was the Coronation of Edward VII and deal with the end of the South African War.

And for a while it was all peachy. The Liberal Party was still a mess over what to do in South Africa. His two biggest acts were a new Education Act and Irish Land Purchase Act, letting the Exchequer loan money to Irish tenants to buy land. He also created the Committee on Imperial Defence.

He also presided over a dramatic improvement in relations with France, ending in the Entente Cordiale of 1904, and almost got involved in Russo-Japanese war, although most of this was down to his Foreign Secretary. However, his budget caused dissension and was one of the prime causes of a rift that grew in his party, with his opponents wanting a more protectionist and less welfare focused approach. Eventually he agreed to meet them half way, putting in place equal tariffs against foreign powers when they placed tariffs on British goods.

However, you try and please both sides, you risk annoying both and that is what he did. His authority was slowly drained away and a lot of people jumped ship, including one young MP known as Winston Churchill. (Churchill himself would later say "If you wanted nothing done, Arthur Balfour was the best man for the task. There was no equal to him").

In 1905 he resigned as Prime Minister in an attempt to give his successor the chance to form a worthwhile government. This did not happen and the Conservatives suffered a landslide defeat in the 1906 election, in which Arthur Balfour even suffered the indignity of losing his own seat (the only time this has ever happened to a leader of the Tories) in Manchester East. A Conservative MP representing the City of London resigned so that Balfour could return to the House of Commons in the resulting by-election.

In opposition, Balfour tried to stifle the succeeding Liberal government via the Conservative majority in the unelected House of Lords. This eventually resulted in the public crying foul after the Lords vetoed a budget that alleviated the tax burden on the poorest members of society, and the Lords' powers were subsequently curtailed heavily.

The Conservatives recovered in the two inconclusive elections in 1910. Although they received more votes, the Liberals narrowly won more seats on both occasions and stayed in power. Following the defeats, Balfour resigned as leader, leaving him with statistically the worst electoral record of any Conservative Party leader, having lead the party into three elections and lost them all (the only one in a similar league is Edward Heath, who also lost three elections, but did win one, and never lost his own seat). He later served as Foreign Secretary from 1915 until the Versailles conference in 1919. His most notable action was the Balfour Declaration

. The letter offered support to Jewish settlers in Palestine and was a key event in the development of Israel.

Was noted for being a windbag of colossal proportions in Parliament, and able to give long, interminable speeches in response to the simplest of questions. While this was handy for making rival politicians wary of asking him any difficult questions, it ended up furthering the impression that Arthur was quite literally long on talk, but short on actually being able to get stuff done.

One of the few Prime Ministers to have been a life-long bachelor... at least publicly, since there's been more than a few suggestions over the years that he had an illicit long-term relationship with a married female aristocrat, and may have been romantically involved with his cousin prior to her premature death. It's more generally thought that he simply didn't find marriage or romance very interesting (and given his notorious windbag tendencies, some political rivals and less charitable historians have suggested that women didn't find him very interesting).