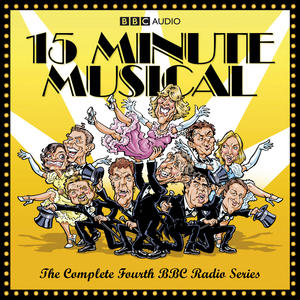 "This is a song about Wayne Rooney or possibly Cheryl Tweedy
Sung to a familiar tune we nicked off an Elton John CD
And the chorus strongly resembles Mr Tambourine Man as performed by The Byrds
The singer's voice usually trembles on the line which has got far too many garbled and convoluted wooords!"
—Richie Webb mocking his own work on the show
Advertisement:

15 Minute Musical (also Fifteen Minute Musical/s) is a BBC Radio 4 comedy series which tells parody stories about celebrities and politicians, using a different musical style for each episode. It is written by Richie Webb, David Quantick and Dave Cohen. One six-episode series has been broadcast every year since 2004 - except for 2009 and 2011 - and in 2009 it won the Writers' Guild Award for Best Radio Comedy.

It's notable for refusing to take anything with even an ounce of seriousness, least of all itself, resulting in a hugely silly, over-the-top World of Ham, run entirely on Rule of Funny, with No Fourth Wall. A thirty-minute Mockumentary, starring Richie Webb and ridiculing the show itself, was broadcast in 2006.