Web Video / Jack And Dean Of All Trades 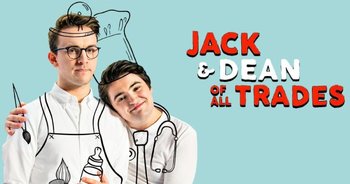 Leave it to the unprofessionals.

'Jack and Dean Of All Trades' is a web series that ran from 2016 to 2018 that follows the misadventures of two young men, Jack and Dean, who, after an impulse decision from Dean to quit their well-paid jobs at the bank, decide to join a temp agency.

Each episode shows them trying their hand at a New Job as the Plot Demands and managing to screw it up in various ways - even as something as simple as painting the office wall.