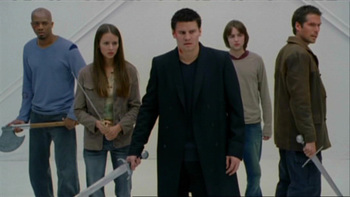 As the members of Angel Investigations reassemble at the hotel offices after their fight with The Beast, Angel tries to contain his rage after seeing Cordelia and Connor make love, while Fred and Gunn reconcile, and Wesley finally decides to break off his passionate, but loveless fling with Lilah. But events change when Connor pays a visit to Wolfram & Hart where the indestructible Beast from Hell also visits and attacks, killing most of the staff including Gavin. Lilah manages to escape with a little of Wesley's help while he leads Angel, Gunn, and Fred into the locked-down offices to find Connor which gets worse when all the victims of the Beast become reanimated zombies out to kill.

The Fang Gang discusses the ways to escape the Wolfram & Hart building. Angel tells them about the White Room and has Fred over ride the automatic shutdown of the elevators. After a couple of failed attempts, Angel manages to remember the code and they are all transported to the White Room only to find they are too late. The Beast is already there draining energy from little girl conduit.

Angel asks how to get out. She is able to tell them that the answer is among. As The Beast leaves her and starts to advance on the AI team, the little girl transports them all back to the hotel before she dies. In Angel's office, as she tells him of her relief everyone is ok, Angel reveals he knows she and Connor slept together and orders her to take her new boyfriend and leave.