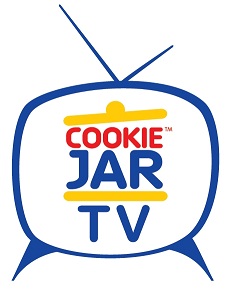 Cookie Jar TV is a Saturday Morning Cartoon block airing on CBS to help fulfill their affiliates E/I quota, and is programmed by Cookie Jar Entertainment, which bought the block when they took over previous owners DiC Entertainment in 2008.

The block was originally named KOL Secret Slumber Party, and had a sponsorship with AOL (KOL was the kids' area). KOL dropped out after the first season (and despite AOL being owned by Time Warner-who also co-owned The CW with CBS-they never even attempted any cross-promotion between SSP and Kids' WB!), so DiC signed a deal with girls' magazine KEWL to use their name instead, giving it the name KEWLopolis. When Cookie Jar bought out the block, it originally kept the name, but in autumn 2009, they changed it to its current name, Cookie Jar TV. However, starting Fall 2013, CBS dropped it for a block run by Litton Entertainment (who already runs a block similar to CBS's planned one on ABC).

A notable aspect of the block was that it was targeted to girls for its first three seasons. It dropped this upon the rebrand, instead making the block gender-neutral.

Shows featured on Cookie Jar TV, in the order they appeared (* denotes reruns):