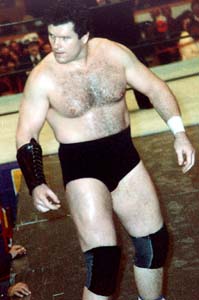 "Iron" Mike Sharpe (born Michael Sharpe, October 28, 1951 – January 17, 2016) was a Canadian Professional Wrestler and trainer from Hamilton, Ontario, famous for his work in WWE during the 1980s. He started in Toronto after training with Dewey Robertson in 1977 and competed in various Canadian territories before switching to the U.S. He found success in various National Wrestling Alliance territories, including Los Angeles, Chicago, San Francisco, Tri-State (Louisiana/Mississippi, the precursor to Mid-South) and Tennessee before he arrived in WWE in 1983 as a Heel. He started off getting a push until he faced WWE World Heavyweight Champion

Bob Backlund in Philadelphia on April 30th. Sharpe lost, and that was the end of his push, as he got moved into his most famous role as a Jobber. He got a few career highlights though, including reaching the second round of the 1988 King of the Ring Tournament and getting to team with Hulk Hogan in New Japan Pro-Wrestling, as Hulk was a heel there. He stayed around into 1995, with his last televised match being a loss to Man Mountain Rock. Among his in-ring achievements, he is a former Stampede International Tag Team Champion