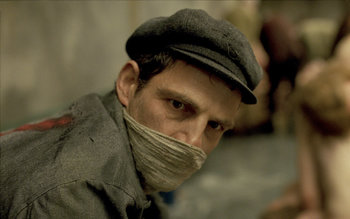 Son of Saul is a 2015 film from Hungary, directed by Laszlo Nemes.

It is set in October 1944, at Auschwitz-Birkenau death camp. Saul Auslander is a Sonderkommando

, one of the squads of Jewish prisoners used to assist in mass murder in the Birkenau crematoria. It is Saul's job, along with the other Sonderkommandos, to get Jews selected for murder undressed and into the "shower" rooms. After a Nazi threw the cyanide gas in and all the Jews were killed, the Sonderkommandos would go through their belongings for valuables, as well as remove the bodies from the gas chamber and take them to the crematoria, and then clean the gas chambers to receive the next group of murder victims.

One day Saul, who goes through his tasks in a machine-like, disassociated state, is shocked to see that a pre-teen boy somehow survived the gas chamber and is still breathing. And it's doubly shocking, because the boy is his son. A Nazi doctor promptly suffocates the boy to death, but Saul becomes determined to give his son a proper funeral with proper Jewish rites, as opposed to letting the body burn in the crematoria. Meanwhile, the Sonderkommandos, who are acutely aware that they themselves will be murdered soon, are organizing a rebellion, smuggling in weapons and explosives to the camp.

Various similarities in plot and tone were noted between this film and The Grey Zone, though Nemes stated that his film was intended as a challenge to the other, arguing that The Grey Zone relied too heavily on emotional upheaval and shock value; as such, he employed more stark realism and minimalism, as demonstrated by the majority of the film taking place close behind Saul.

The film received universal acclaim upon its release. It won, among others, the Academy Award, Golden Globe, Critic's Choice Award, Independent Spirit Award, and BAFTA for Best Foreign Language Film, as well as the Grand Prix at Cannes.