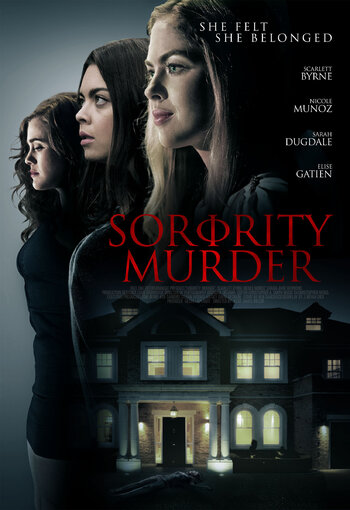 Sorority Murder is a 2015 Lifetime Movie of the Week Thriller, directed by Jesse James Miller and written by Bryan Dick.

Jennifer Taylor (Scarlett Byrne) is a freshman at Whittendale University, eager to study architecture and to escape the stress at home, where her mother Melissa (Sarah-Jane Redmond) struggles with alcoholism. At school, she catches the eye of the members of Beta Sigma Eta, a popular sorority. Beta Sig sister Alex (Nicole Muñoz) befriends Jen and invites her to join. Jen mingles with other sisters like Carly (Melissa Roxburgh), Natalie (Elise Gatien) and Gabrielle (Sarah Dugdale), but is wary of Breanne (Clare Filipow), the overbearing chapter president. After Jen gets in a fight with her at a party, Breanne's body is discovered outside the sorority house, fatally stabbed with one of Jen's X-Acto knives. Jen must now fight off suspicion that she's a murderer, as she also tries to rebuild her relationship with her mother, who's sworn off alcohol.

No relation to Sorority House Massacre, though this movie doesn't exactly slouch on the body count front.