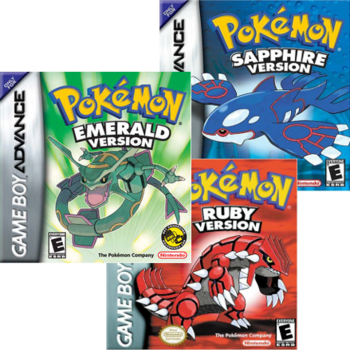 Bringing an advanced generation to the world.
"Immerse yourself in the beautiful region of Hoenn, a place of masterful heroes and mysterious teams, of friendship and battles. As the new kid in town, you set off on your journey as a Pokémon Trainer. Who knows what wonders and dangers await you? Now it's time to grab your gear and head out on your own..."
— Blurb on the back of the boxes of Pokémon Ruby and Sapphire Versions
Advertisement:

These games may be the biggest case of One Game for the Price of Two in the franchise, as there is literally no way to legitimately collect all 386 Pokémon without aid from FireRed, LeafGreen, Colosseum, and XD (and oddly, only Ruby or Sapphire, because Emerald has whatever Pokémon the other version lacks).note The Game Boy Advance had backwards-compatibility for the Game Boy Color, but its link cables were unable to connect the two systems; coupled with the aforementioned data structure redesign, there was no method for importing or trading Pokémon from Gold, Silver or Crystal to Ruby, Sapphire or Emerald. The Red and Blue remakes provided all 150 Kanto Pokémon and a small pool of Johto's, with Colosseum and XD having several from all three regions; together, they had all but the event-only Pokémon. Perhaps not coincidentally, it was during this generation that Nintendo stopped using "Gotta Catch 'Em All'' as the franchise's slogan.

On May 7, 2014, The Pokémon Company announced remakes for the Nintendo 3DS, titled Pokémon Omega Ruby and Alpha Sapphire. The games were released in November 2014, exactly twelve years after the originals' release in Japan. Groudon and Kyogre have newly-introduced "primal" formsnote they have more intricate Tron Lines and prominent "omega" and "alpha" designs on their hands, respectively, and these Tron Lines now glow yellow and turquoise instead of blue and red, on top of straight-up glowing panels on their bodies, which are depicted on the boxart, other Pokémon get Mega Evolutions, lots of features were added or upgraded, and a post-league scenario known as the Delta Episode was included. These games are part of the "Sixth Generation" of Pokémon games and are compatible with Pokémon X and Y. 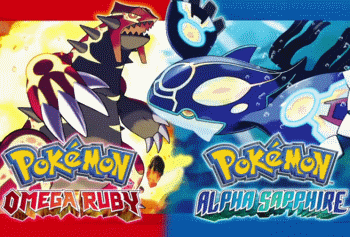