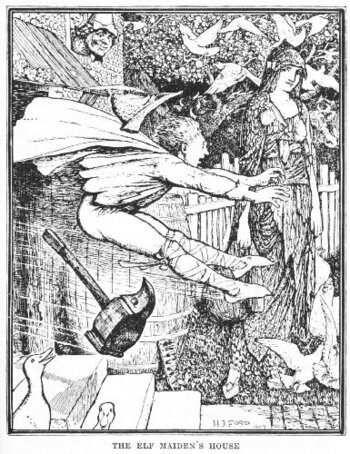 "The Elf Maiden" is a Lapp Fairy Tale collected by Andrew Lang in "The Brown Fairy Book".

Once upon a time, two fishermen fell in love with the same woman. They lived in a coastal town whose folks had the custom to move to a nearby island every spring, where they spent the warmer months, and sail back to the mainland at the beginning of autumn.

During a summer, one of the fishermen realized his love interest was beginning favoring his rival; so, the fisherman tricked him into staying behind the day when the villagers were returning to the mainland.

Realizing he had been marooned in the island, the man took up residence in an abandoned hut, armed himself with a hunting bow and managed to survive until midwinter. On Christmas Eve, the man witnessed a group of strange folks arriving at the island, so he hid behind a woodshed while the newcomers explored the place.

However, two maidens spotted the man hiding behind the wood stack, and one of them was curious and brave enough to give him a poke. She accidentally pricked her finger with a pin sticking out his jacket and screamed loudly. When the entire group went to see what was happening and saw the man, they fled, leaving the maiden behind in their hurry. Then the maiden said the man he had to marry her because he had drawn her blood. The man replied he was willing to take her as his wife, but he was worried about them surviving during winter season. However, the maiden reassured him that her family would take care of everything if he married her.

Thus, the man promised to make her his wife, and indeed they easily found plenty food throughout the cold season. When the spring returned, the maiden said she would like to move far away from the huts from the fishing-folk before the villagers returned. Her husband agreed, and they found a nice spot to settle on the opposite side of the island.

Since it was too late to start building their house, both spouses lay down on the ground to get some sleep. Before falling asleep, though, the maiden warned her husband to not get up or open his eyes, whatever he heard. The man did as he was told, and upon waking up he found their house had been built by night. Then his wife told him to find a spot for the cow-stalls, and after they were mysteriously built in one single night, measure out the ground for a storehouse.

When their new homestead was finished, both spouses decided to pay her parents a visit. Her parents welcomed them warmly, but when it came time to leave, the wife warned him to jump quickly over the threshold. The man did as he was told, dodging a hammer thrown at his legs by his father-in-law.

On the way back home, the wife warned her husband to not look back until he set foot in their home, whatever he might see or hear. The man did his best to ignore the growing noises of cattle following them. When he was already touching the doorknob, he thought it would be safe to turn around. The half of a huge herd of cattle -sent by his father-in-law in acknowledgement that his daughter had proved to be smarter than him- vanished, but enough cattle were left to make both spouses rich.

Husband and wife lived happily together since then, but every so often she vanished unwillingly and never told him where she had been. The husband kept quiet about it for one long time, until one day he openly complained about her unexplained absences. Then her wife told him he could stop it by driving a nail into the threshold. And so he did.

, in the Project Gutenberg