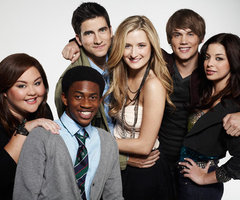 I'm So Dizzy from the Ride.
Gigantic was a show on TeenNick, developed by Marti Noxon. It is a comedy drama set in Hollywood, focusing on several children with famous parents trying to carve out identities for themselves separate from their parents. The show started in 2010 and was canceled at the end of its first season in April 2011.

Tropes featured in this show include: