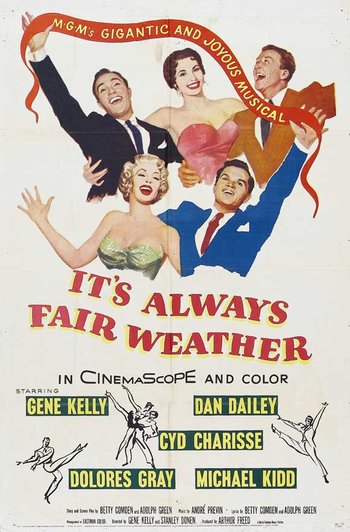 It's Always Fair Weather is a 1955 musical that, once again, teams up both Gene Kelly and Stanley Donen as directors, with the former starring onscreen, and also stars Dolores Gray and Cyd Charisse.

It tells the story of three friends, Ted Riley (Gene Kelly), Doug Hallerton (Dan Dailey) and Angie Valentine (Michael Kidd), who are all soldiers in World War II. Now it's 1945, the war's ended, and the three friends all arrive back home. They decide to make a pact amongst themselves: They won't see each other until a decade later, while they go their separate ways to fulfill their hopes and dreams. Then they'll meet up to see how well they're all doing.

Now it's 1955: While they have stayed true to this promise, when they return and meet up again they find out they have essentially nothing in common anymore. Not only that, but all their dreams haven’t been fulfilled.