Film / It's a Wonderful World 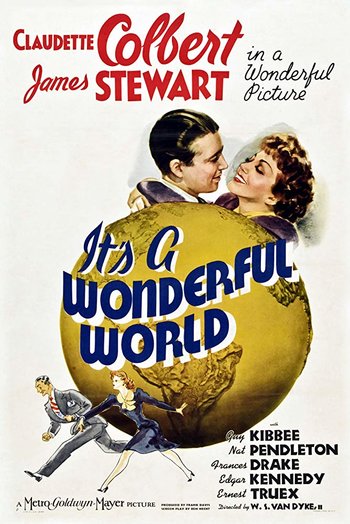 Guy Johnson (Stewart) is a fugitive private detective whose client, Willie Heyward, was framed for the murder of a glamourous Spanish singer, Dolores Gonzalez. Willie’s wife Vivian and her lover are really the ones who committed the murder, in order to get $10 million out of Willie's insurance once he gets capital punishment. Consequently, Guy is indicted for hiding Willie but escapes after he finds a clue in a newspaper; turns out that Vivian's long-lost husband, who she thought died in Australia, is alive and has evidence to frame her.

Guy is resolved to find this lost husband and prove Willie’s innocence. Unfortunately, he runs into “poetess” Edwina Corday (Colbert), who decides to follow along with this tale of intrigue.

Not to be confused with It's a Wonderful Life, despite the similar title and the presence of Jimmy Stewart in the cast, or The World Ends with You, which has the exact same title in Japanese.