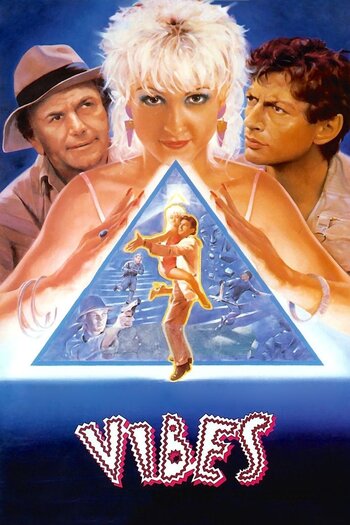 Vibes is a quirky 1988 American romantic comedy adventure film directed by Ken Kwapis. It's about Nick Deezy (Jeff Goldblum), a psychometrist working at a museum, and Sylvia Pickel (Cyndi Lauper), a medium with a Deadpan Snarker spirit guide named Louise. Meeting at a study for psychics, the two take a nearly instant dislike to each other.

Nick and Sylvia are hired by Harry Buscafusco (Peter Falk) to travel with him to Ecuador to find his missing son. However, Nick quickly deduces that something isn't right, and Harry confesses that what he's actually after is the lost City of Gold.