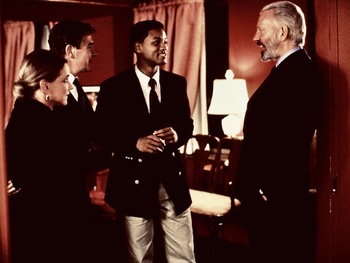 From the 1993 movie version, from left to right: Stockard Channing, Ian McKellen, Will Smith, Donald Sutherland.
Ouisa: I read somewhere that everybody on this planet is separated by only six other people. Six degrees of separation. Between us and everyone else on this planet. The President of the United States. A gondolier in Venice. Fill in the names. I find that (a) tremendously comforting that we're so close, and (b) like Chinese water torture that we're so close. Because you have to find the right six people to make the connection. It's not just big names. It's anyone. A native in a rain forest. A Tierra del Fuegan. An Eskimo. I am bound to everyone on this planet by a trail of six people. It's a profound thought.
Advertisement:

Six Degrees of Separation is a play written by John Guare and first produced in 1990. It is loosely Based on a True Story.

The plot follows Flan Kittridge, a Manhattan art dealer who sells art to private collectors, and his wife Ouisa. They are entertaining a potential client at home in their apartment one evening when they're interrupted by Paul, a young African-American man who's apparently been stabbed, and who claims to be (a) a friend of their children from college, and (b) the illegitimate child of Sidney Poitier. During the course of the evening, Paul cooks for the Kittredges and charms them with stories about their children, about art and literature, and about his "father's" plans to make a live-action film version of Cats. Flan and Ouisa let Paul stay the night, but after discovering him in bed with another man the next morning, they furiously have him thrown out of the building. Soon afterward, they discover that more of their friends and acquaintances have also been taken in by Paul.

The play won the New York Drama Critics Circle Award for best play (as well as an Obie), and was nominated for four Tony awards, including Best Play, Best Actor (for Courtney B. Vance, who played Paul), Best Actress (for Stockard Channing, who played Ouisa), and Best Director (for Jerry Zaks, who won). It was later turned into a 1993 film directed by Fred Schepisi, with Channing reprising her role as Ouisa, Donald Sutherland as Flan, and Will Smith as Paul. While the film was never a big hit (the play ran for almost two years), the title did eventually inspire the "Six Degrees of Kevin Bacon" game.

The play and the film provide examples of: