Film / My Father the Hero 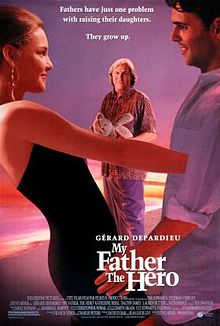 My Father the Hero, the 1994 American remake of the 1991 French film Mon père, ce héros, is a romantic comedy directed by Steve Miner and starring Gérard Depardieu.

Andre (Depardieu), a divorced Frenchman, takes his estranged daughter Nicole (Katherine Heigl, in her first starring role) on vacation in the Caribbean. Nicole wants little to do with her father because she feels he abandoned her. While on vacation Nicole meets Ben (Dalton James), a local, and falls in love. Wanting to appear more worldly and grown up, she tells Ben that Andre is not her father, but her lover. Hilarity Ensues.