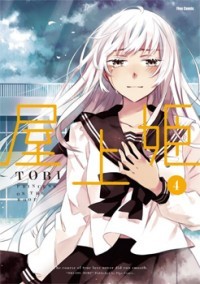 Okujyou Hime (Rooftop Princess) is a short manga by TOBI, the author of Megane Na Kanojo. The manga, at only 21 chapters and published in 2010, makes up for a enjoyable, bittersweet romance drama.

Mayuzumi Youhei, Genjyou Nobutada and Ijyuuin Yuiko have been best friends since elementary. Mayu is the timid, nerdy one; Nobu, the confident, outgoing one and Yuiko, the only girl of the trio, the introverted and cute one. It's a new high school and a new season, one that has the trio in high spirits and high hopes.

When Yuiko gets hitted-on by some random skirt chaser, she's saved by a tall, beautiful white-haired girl. That's when Mayu sees Kasugami Sumika, the Rooftop Princess, for his first time. Obviously, something happens inside Mayu at that time.

That very same afternoon, he sees Sumika dropping a bouquet of roses from the rooftop, and when he goes there to return the flowers, he gets out with the cool, sad princess as his new girlfriend. And so it begins a story of love, loss, sadness and strength.