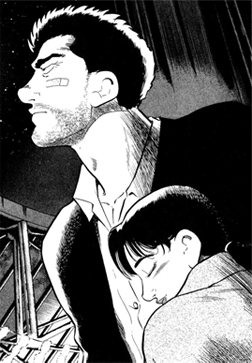 A Japanese manga spanning from 1996 to 1998, Oldboy is perhaps better known for the loosely-adapted film version of the same name.

Kidnapped without provocation, a man identifying as Yamashita is kept in a tiny cell, with only a TV, bed and bathroom. Left with nothing to do but exercise and pass time, he spends ten years alone, only to find himself dressed, drugged and dumped in a public park without reason. Given plenty of money and a phone by his captors, Yamashita meets a young girl named Eri, finds his old friend Tsukamoto and even gets a job, but finds himself driven to track down those who imprisoned him.

Later developed into a highly successful Korean movie (by Park Chan-wook) in 2003, the series was translated in 2005 following the film's international success.

Please note that, like its film counterpart, this manga involves several major twists and reveals so watch for spoilers.

This manga series contains examples of: