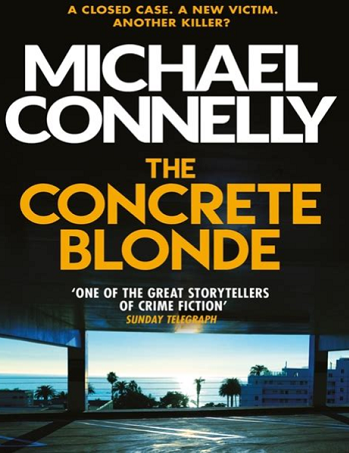 The Concrete Blonde is a 1994 detective novel by Michael Connelly, the third to feature LAPD detective Harry Bosch.
Advertisement:

Bosch is sued by the widow of the Dollmaker, a suspected serial killer he shot during a tense standoff some years earlier. Bosch, acting on a tip from a prostitute, entered the Dollmaker's apartment, and shot him after the Dollmaker reached for something under his pillow, which turned out to be a toupee.

The suspect Harry Bosch killed was identified as a man named Norman Church. Makeup from the Dollmaker's victims was found in Church's bathroom, seemingly clinching the case. But Church's widow is suing, and powerhouse attorney Honey Chandler is charging that Bosch shot an innocent man and the LAPD framed him after the fact. Harry is sure that he did in fact get the right man—until a note purportedly from the Dollmaker is delivered to him. The note leads to the discovery of a body, and a crime which matches the Dollmaker's modus operandi, causing Harry to wonder if he really did shoot an innocent man.

Plot elements from this novel were used in the first season of the Amazon series Bosch.